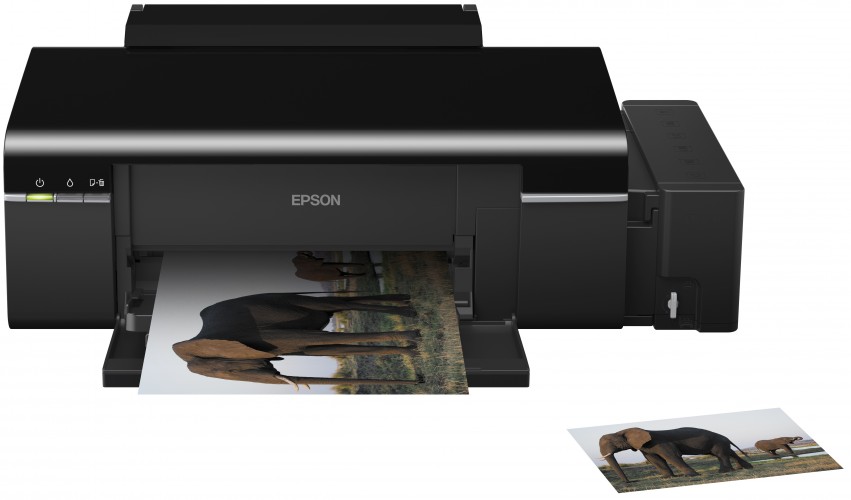 Visitors to the Days of the Dinosaurs exhibition at the Cape Town International Convention Centre running until the 20 August 2014 can have their ‘prehistoric day’ immortalised by having their photographs taken with T-Rex printed there and then at the official photo station using Epson’s L800 ITS (Ink Tank System) photo printers.

The highly successful exhibition, presented by Huisgenoot, You and Drum, attracted thousands of visitors during its Johannesburg leg. The photo station proved to be a huge success over the duration there, and thousands of pictures were printed using the eight Epson L800 ITS printers.

“We recommended the Epson L800 ITS photo printer to the Days of the Dinosaurs organisers for the photo station because it offers excellent photo quality prints, affordable running costs and high volume prints, thanks to Epson’s integrated ink tank system,” says Clive Barnett of Colour Corporate Cape Town, who supplied the eight Epson L800 ITS photo printers for the printing station.

“We consulted several experts before we set up the photo station, and they all recommended the Epson L800 ITS photo printer for its fast print output and outstanding picture quality and ease of use. The photo station was operated by students hired for the duration of the event, and they managed the devices with no problems at all,” says Edmund Beukes, Head of Marketing of Huisgenoot, You and Drum.

“Visitors can pose in either a ‘dinosaur egg’ or climb onto the back of a ‘T-Rex’ – and be photographed by our on-site photographer. We found that most visitors prefer clambering onto the ‘T-Rex’ – and don’t mind waiting in line for that moment either! Within a few minutes, their pictures are printed and ready for collection in a Days of the Dinosaurs-branded frame,” he says.

The photo station in Johannesburg was a huge success with between 500 and 700 photos printed daily, using the Epson L800 ITS photo printers. The exhibition team expects the Cape Town event to be as successful. A5 prints cost between R50 and R65, depending on visitors’ requirements, and can be purchased using cash or card.

About Epson
Epson is a global imaging and innovation leader that is dedicated to exceeding the vision of customers worldwide through its compact, energy-saving, high-precision technologies, with a product line-up ranging from printers and 3LCD projectors for enterprise and the home, to sensors and other micro devices.

Led by the Japan-based Seiko Epson Corporation, the Epson Group comprises more than 78,000 employees in 99 companies around the world, and is proud of its on-going contributions to the global environment and the communities in which it operates.
http://global.epson.com/

Please submit the requested details to download the brochure

The fields marked with an asterisk (*) are mandatory fields.

About Epson
Epson is a global technology leader dedicated to connecting people, things and information with its original efficient, compact and precision technologies. With a line-up that ranges from inkjet printers and digital printing systems to 3LCD projectors, smart glasses, sensing systems and industrial robots, the company is focused on driving innovations and exceeding customer expectations in inkjet, visual communications, wearables and robotics.

Led by the Japan-based Seiko Epson Corporation, the Epson Group comprises more than 67,000 employees in 90 companies around the world, and is proud of its contributions to the communities in which it operates and its ongoing efforts to reduce environmental impacts.